This piece was originally published in The Chronicle of Philanthropy.

There is a lot of talk these days about how California provides a counternarrative to the divisive, ill-considered policies of the federal government. In his new book, State of Resistance, Manuel Pastor, a University of Southern California professor, offers an engaging, up-close view of how California’s contrariness came about.

A key force in the state’s transformation, Pastor asserts, is the role of grass-roots activists and social movements in pushing state leaders to accept and embrace government’s rightful role as a force for positive social change. As Pastor reminds us, “Policy change does not always start in the halls of state or local legislatures but rather in the streets, workplaces, and voting booths, where power is contested.” 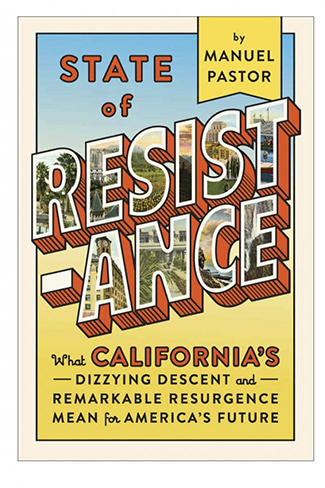 Pastor’s book is a must-read for philanthropy—whether your giving is focused on social services or social justice or any other cause. It demonstrates why:

History matters. As recently as 20 years ago, California was no different than states like Alabama or Arizona are today when it comes to adopting harsh, exclusionary policies targeting immigrants and African-Americans. In the 1990s and early 2000s, California voters approved ballot measures denying health care and public education to undocumented immigrants, banned affirmative action in college and university admissions at public institutions, and increased prison sentences for repeat offenders through the notorious “three strikes” law. The retrograde us-versus-them politics we are seeing across the nation today was the State of California less than a generation ago.

The future is already here. Pastor lays out how today’s California is “America’s fast-forward.” On issues such as immigration, criminal justice, education, and climate change, our state is a now a leader in advancing common-sense solutions.

The seismic geopolitical shift in public policy over the last two decades was not merely a function of demographic changes. Pastor attributes the changes to community-based, and labor-supported, activism and organizing efforts across the state. Our nation is nearly 250 years old, but in the blink of a historical eye, California morphed from a state of exclusion to a state of inclusion—with community organizers leading the way from the ground. Now California asserts itself as a state of “resistance” against the current national geopolitical landscape.

The path forward is clear, and it’s about equity. Pastor offers a visionary—but doable—path toward a future that invokes the promise of America. Challenging the reader to shift from the very title of his book—“Resistance”—Pastor nudges and encourages us to put forward a vision of an inclusive, forward-looking, lift-all-boats nation, with California poised to set a new national tone of meaningful opportunity.

He asserts that we cannot afford to shy away from the specter of racism but must push for an America that puts racial equity front and center. He suggests developing a grass-roots- and community-generated new “social compact” to define that forward-looking vision.

Here are several takeaways from the book that we believe all grant makers can learn from:

Pastor reminds us that California’s progress is “tentative.” Whether we are working in California, in other states, or globally, the message from State of Resistance is that positive social change requires the discipline of hard work, smart and patient investments, and strengthening the capacity of people and groups to speak up and organize for the common good. It’s a timely reminder to all of us in philanthropy that investing in people power gives us the best possible return on investment.

Robert K. Ross is CEO of the California Endowment. Cathy Cha is vice president for programs at the Evelyn and Walter Haas, Jr. Fund.

Help immigrant children and youth thrive and unleash their potential to shape the future of California.

Undocumented graduates’ stories show the value of investing in critical supports and services for a very vulnerable population.